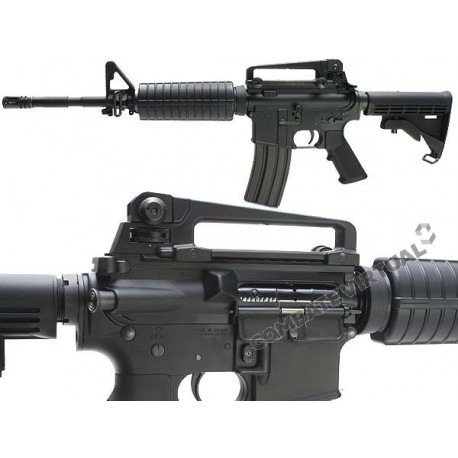 Notify me when available

The M4A1 was developed originally in the early 90’s, as a carbine version of the M16A2, effectively being an evolution of the M733, the Colt Commando. Despite being adopted in small scale in 1994, the M4 only started being used in a large scale from the start of the “Global War on Terror” (2001) having ended up replacing the M16A4 as the U.S. Army’s primary weapon system.

Marui’s M4A1 SOCOM is a mirror image of the original M4A1 – simple, with the classic LE-type stock and no rail system. It’s ideal for someone looking for either a classic looking recoil shock weapon or a base to build the weapon as the end-user so desires, by picking their own rails, stock, etc, with a cheaper base price than the already equipped models.

The gun also has a bolt stop function, so on the last shot fired, the weapon ceases to function, requiring a fresh magazine and a press on the bolt catch to get the weapon working again, giving additional realism, besides the impressive kick the weapon already provides.

Comes with the typical Marui power (290 FPS / 0,20g) but also with the brand’s characteristic reliability.

PROOF OF MEMBERSHIP TO AN APD (ASSOCIAÇÃO PROMOTORA DE DESPORTO), IS REQUIRED SHOULD YOU WANT TO ORDER AN AIRSOFT WEAPON, PLEASE SEND YOUR PROOF OF MEMBERSHIP (OR PASSPORT, IN CASE YOU LIVE OUTSIDE OF PORTUGAL) TO THE FOLLOWING E-MAIL: Combatevirtualstore@gmail.com

THE WEAPON MUST BE PAINTED IN FLUORESCENT COLOURS (YELLOW/RED IN THE DIMENSIONS THE LAW REQUIRES). THE WEAPONS WE SELL WILL ALWAYS COME PAINTED WITH FLUORESCENT YELLOW, EVEN WHEN EXPORTED.

YOU MUST BE 18 OR OLDER TO PURCHASE, OR 16 YEARS OLD OLDER WITH PARENTAL CONSENT (WRITTEN).

1 – Those, whom without authorization, outside of the legal conditions or against the orders of the responsible authority, holds, transports, imports, keeps, purchases, or by any means obtains, manufactures, transforms, imports or exports, uses or brings with them class G weapons, is punished with a fine of 400€ to 4000€.

Be the first to write your review!

30 other products in the same category: