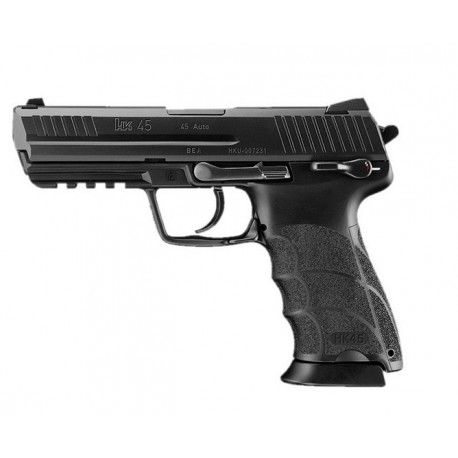 The HK45 was developed to run in the JCP program – Joint Combat Pistol – which intended to arm all branches of the US military with a new .45 caliber handgun. The program was suspended indefinitively in 2006 (the M9 is still the primary sidearm in service) but the gun was launched onto both the civilian and law enforcement markets any way.

Marui’s version is handgun made almost entirely out of ABS, but with high performance and gas efficiency. It has an active safety that also acts as a decocker (allowing for the gun to be shot in both single and double-action modes) and an ambidextrous slide-release, present on both sides of the gun. The magazine release is ambidextrous.

PROOF OF MEMBERSHIP TO AN APD (ASSOCIAÇÃO PROMOTORA DE DESPORTO), IS REQUIRED SHOULD YOU WANT TO ORDER AN AIRSOFT WEAPON, PLEASE SEND YOUR PROOF OF MEMBERSHIP (OR PASSPORT, IN CASE YOU LIVE OUTSIDE OF PORTUGAL) TO THE FOLLOWING E-MAIL: Combatevirtualstore@gmail.com

THE WEAPON MUST BE PAINTED IN FLUORESCENT COLOURS (YELLOW/RED IN THE DIMENSIONS THE LAW REQUIRES). THE WEAPONS WE SELL WILL ALWAYS COME PAINTED WITH FLUORESCENT YELLOW, EVEN WHEN EXPORTED.

YOU MUST BE 18 OR OLDER TO PURCHASE, OR 16 YEARS OLD OLDER WITH PARENTAL CONSENT (WRITTEN).

1 – Those, whom without authorization, outside of the legal conditions or against the orders of the responsible authority, holds, transports, imports, keeps, purchases, or by any means obtains, manufactures, transforms, imports or exports, uses or brings with them class G weapons, is punished with a fine of 400€ to 4000€.

Be the first to write your review!

30 other products in the same category: